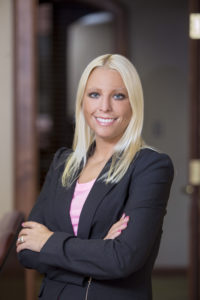 Ashley McGee joined Moore Ingram Johnson and Steele in 2017 as a legal assistant and became an associate attorney at the Brentwood office in 2018.

Ashley is from Hopkinsville, Kentucky and graduated from Hopkinsville High School with honors as Valedictorian. Two weeks after graduating from high school, Ashley began pursuing her bachelors of science degree in political science with a legal studies concentration at Austin Peay State University, where she graduated Summa Cum Laude two and a half years later. During her time at Austin Peay, Ashley was the President of the Pre-Law Society, Vice President of Pi Sigma Alpha, Public Relations Officer of Gamma Beta Phi, member of Phi Kappa Phi, and a member of the National Golden Key Honor Society. Ashley participated in Moot Court and peer mentoring, while also being awarded the Who’s Who Among Students in American Universities and Colleges award.

Ashley then continued pursuing her dreams of becoming an attorney at Belmont University College of Law, where she participated in American Inn of Court, multiple externships with the Beacon Center of Tennessee, Davidson County General Sessions, Davidson County Drug Court, and Criminal Court Division I. She is also a member of the American Bar Association.