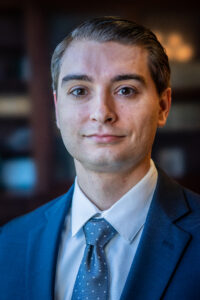 Andrew was born and raised in Cleveland, Ohio. After graduating high school, he enlisted in the Marines and served on active duty for four years. His service included a deployment to Iraq where he worked in support of the Counter-IED Operations Integration Center.

Following his service, Andrew attended The Ohio State University, earning a BA in history and political science in 2012. He then attended The Ohio State University Moritz College of Law where he earned his JD in 2015. While in law school, Andrew completed an externship with the Supreme Court of Ohio and also worked at the Grassbaugh Veterans Project, which provides pro bono legal services to military veterans. Andrew was admitted to practice law in Ohio in 2016 and spent the next four years practicing in the areas of business law and business litigation in Columbus.

Andrew and his wife relocated to Atlanta when his wife received an unexpected job offer. Andrew then became licensed to practice law in Georgia in June 2020 and joined Moore Ingram Johnson & Steele as an associate in 2021.

In his spare time, Andrew enjoys exercising, reading about history and politics, and following sports. He is a die-hard Cleveland Browns and Ohio State Buckeyes fan, but generally follows all Cleveland sports.