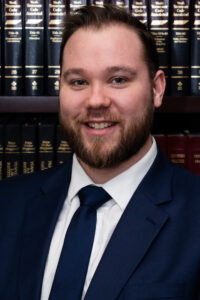 Garrett Belcher is a Southwest Virginia native, raised in the Appalachian Mountains of Bluefield, Virginia. He received his Bachelor of Science in Business Administration from the University of Virginia’s College at Wise with cum laude honors. In 2018, Garrett and his wife, Sarah, moved to Knoxville, TN to reach their educational goals and pursue new opportunities. Immediately after moving to Knoxville, both Garrett and his wife fell in love with the “Scruffy City” and decided to call it their new home. In 2021, Garrett received his law degree from the Lincoln Memorial University’s Duncan School of Law. During law school, Garrett received CALI awards in both Contracts and Legal Ethics. As Garrett was preparing for the July 2021 Tennessee Bar Exam, he and his wife welcomed their first child, Ella, to the world on July 22, 2021

In Garrett’s free time, he enjoys spending time with his wife and daughter, visiting family and friends, walking and riding bikes on Knoxville’s greenways, trying new restaurants and different beers, watching binge worthy TV series, playing his favorite video game “Rocket League”, and taking their dogs to the dog park. Garrett is also an avid fan of all genres of music and can play the guitar and ukulele.