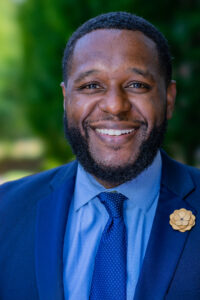 Eric is a native of Los Angeles, California.  He received a B.A. in Political Science from Morehouse College.  He went on to receive a Juris Doctor degree (J.D.) and a Master of Laws degree (L.L.M.) in intellectual property from the University of Akron School of Law.

Eric’s legal career has led him to litigate in a variety of contexts.  In Nationwide Insurance’s trial division, he defended individual and corporate insureds in personal injury actions.  As an assistant prosecuting attorney, he prosecuted felony offenders at both the trial and appellate levels for criminal offenses such as aggravated murder. As a solo practitioner, he has litigated cases in state and federal courts involving personal injury, business, family, and consumer protection laws.

Eric came to MIJS from Cleveland, Ohio where he was an active member of the community.  He was selected to be a member of the Cleveland Plain Dealer’s Editorial Board and wrote a weekly opinion column.  He was also a volunteer youth basketball coach and offered free legal services as a volunteer attorney with the Legal Aid Society of Cleveland.