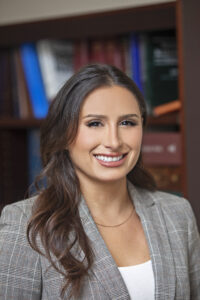 Born and raised in Cincinnati, Ohio, Mackenzie received her B.A. in Politics and Government, from Ohio Wesleyan University. While at OWU, Mackenzie played on the women’s tennis team, is a member of Delta Delta Delta, served as head of the judicial committee for the Panhellenic Council, and competed in Moot Court.

Mackenzie moved to Nashville in 2014 and worked at the Attorney General’s office until she attended law school. She graduated from Belmont University College of Law in 2019. While at Belmont, Mackenzie was an active member of the Women’s Law Group and published an article about the effects of Copyright on tattoos.

Mackenzie lives in east Nashville with her husband and two dogs. In her spare time, Mackenzie is an amateur sommelier who enjoys eating at new restaurants, watching the Buckeyes, and when she can get away, scuba diving.