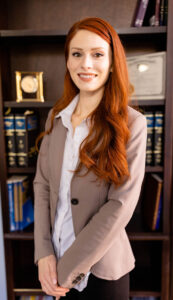 Katelyn is a Georgia native having spent much of her childhood in Atlanta and Alpharetta, Georgia. She earned her bachelor’s degree from Montclair State University in Montclair, New Jersey, majoring in Jurisprudence and minoring in Business Administration. At MSU, Katelyn was a member of Delta Xi Delta sorority and served as president of the local organizations on campus.

Katelyn earned her J.D. from Widener University Commonwealth School of Law in May of 2021. While attending law school, Katelyn became a member of the Phi Alpha Delta International Law Fraternity and was actively involved in her community. She was part of Dauphin County’s first graduating class of Court Appointed Special Advocates (CASA) in 2019 and is involved with Big Brothers Big Sisters of the Capital Region.

When she is not working, Katelyn enjoys reading, running, baking, and paintballing in her spare time.