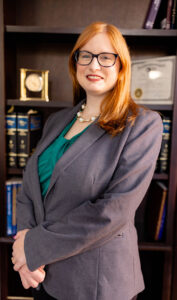 Kaleigh Ryder joined Moore Ingram Johnson & Steele, LLP in October of 2021 as an associate in the firm’s workers compensation defense division. Kaleigh has recently expanded her practice areas to include business and family law.

Kaleigh is a native of Pennsylvania and received her B.S. in psychology with a minor in English literature from Lebanon Valley College. She then received her law degree from Widener University Commonwealth Law School. During law school, Kaleigh joined the Trial Advocacy Honor Society where she participated in multiple mock trials and honed her advocacy skills. She also earned two CALI Awards for earning the highest grades in her Pennsylvania Civil Procedure and Legal Writing III classes. Kaleigh was admitted to the Pennsylvania Bar in December of 2020. Kaleigh is an active participant in the Dauphin County Bar Association where she has been selected to sit on the Workers’ Compensation Division’s board for the next four years as she transitions from secretary through the ranks to president.