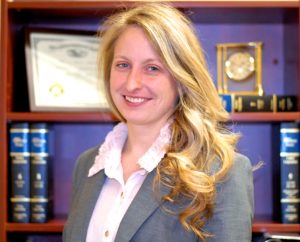 Shannon R. Harkins joined Moore, Ingram, Johnson & Steele in 2019 as an associate in the firm’s litigation department. Shannon earned her J.D. from Temple University’s Beasley School of Law in 2014 and is admitted to practice law in Pennsylvania and New Jersey. She is also admitted to practice before the United States Federal Courts in the Eastern District of Pennsylvania and District of New Jersey.

While in law school, Shannon participated in Temple’s clinical program with the Southeastern Pennsylvania Transportation Authority where she assisted in defending liability claims against SEPTA. Since graduating law school Shannon has worked for five years litigating civil cases. She has represented consumers at arbitrations and jury trials and practiced in state and federal courts; primarily in the Philadelphia Court of Common Pleas and in the superior courts, appellate court, and United States Federal District Court of New Jersey.

In her spare time, Shannon enjoys traveling and being outdoors, particularly in the mountains or at the beach with her husband Nick, or playing with her nieces and nephew.