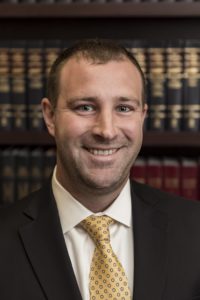 Alex Morrison is a Partner in the Firm’s Litigation Group, and he is licensed to practice in Pennsylvania, Tennessee, and North Carolina. Alex was born and raised in rural Pennsylvania, and attended Lebanon Valley College, where he was Captain of the baseball team. Following graduation, Alex attended Duquesne University School of Law in Pittsburgh, Pennsylvania, where he graduated summa cum laude in the top 5% of his class. During law school, Alex also served as a senior member of the Duquesne Law Review and as the Editor-in-Chief of the Duquesne Business Law Journal.Alex began his career at Moore, Ingram, Johnson, & Steele in 2009 in the Firm’s Knoxville office. In this capacity, he has represented both large and small companies and has litigated cases in over 40 counties in Tennessee and with each office of the Tennessee Bureau of Workers’ Compensation. Alex has also been a member of the Knoxville Bar Association, Tennessee Defense Lawyers’ Association, the Defense Research Institute, and served on the Workers’ Compensation Committee of the Claims and Litigation Management Alliance (CLM).More recently, Alex has overseen the Firm’s expansion into Pennsylvania, where the Firm is rapidly growing its presence, particularly in workers’ compensation defense and estate planning. In this area, Alex has continued to represent employers and insurance carriers of all sizes, many of which partner with the Firm in several states. In his practice, Alex believes in being proactive rather than reactive. He strives to offer the highest level of effective and timely communication, provide creative problem-solving options for his clients, and aggressive litigation when needed.

In his spare time, Alex enjoys spending time with his wife and son, as well as their four dogs. Alex also enjoys being outdoors, playing golf, traveling, and cheering Penn State football.