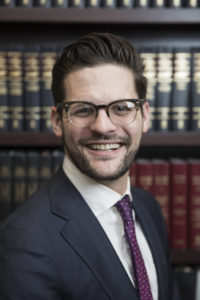 Garett Franklyn joined Moore Ingram Johnson & Steele in 2017 as an associate in the Knoxville office. Prior to joining the firm, Garett practiced in Memphis handling federal and state criminal and civil matters. His practice is primarily devoted to civil litigation with a focus on workers compensation.

Garett currently lives in Knoxville with his wife, Jennifer, where they enjoy hiking, traveling, and watching Tennessee sports.